The good news is that our flying field is not affected. 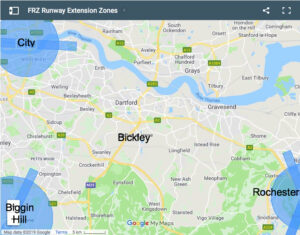 On 13 March 2019 the drone flight restriction zone around airports and airfields changes. The government has introduced a new rule stating that the 1km restriction from the airfield boundary is replaced by a restriction using the airfield’s existing aerodrome traffic zone, which has a radius of either two or two and a half nautical miles and then five kilometres by one kilometre zones starting from the point known as the ‘threshold’ at the end of each of the airfield’s runways. Both zones extend upwards to a height of 2,000 feet above the airfield. It is illegal to fly any drone at any time within these restricted zones unless you have permission from air traffic control at the airport or, if air traffic control is not operational, from the airport itself.

A map detailing the flight restriction zones at each protected aerodrome in the UK can be found at www. dronesafe.uk