Thank you to the few 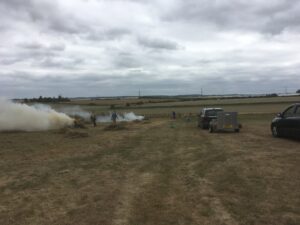 Many thanks to Alan Cooper, Alan Banks, Aidan Angel, Bob Dyer-Hamblett and Mark Fricker who turned up to help with clearing the overgrown sections on the patch today. Work was well underway by the time I arrived at 10:30.

Alan Cooper was operating the power scythe which he had collected from the hire shop in Dartford that morning, whilst everyone else raked the cuttings into piles as he went.

it was decided that the easiest was to dispose of the cuttings was to burn them. They burnt very hot and fast and fairly quickly we were just left with two small mounds of hot ash.

Alan Banks will run the mower over it all in the near future, after which it will be difficult to see where the overgrown part had been.